In the multiple Oscar-winning film “Forrest Gump”, one memorable scene shows how the lead character (played by Tom Hanks) accidentally ‘creates’ “Smiley Face” when he wiped dirt off his mud-covered face with a t-shirt. While the movie’s origins story is fiction, the fact that a t-shirt is a compelling medium of expression and can even become a catalyst in the creation of pop culture icons such as the aforementioned “Smiley Face” – that is very real. Originally issued as an undergarment by the U.S. Navy around the time of the Spanish American War, the humble t-shirt’s popularity has grown leaps and bounds largely because of its simplicity and practicality.

At W3-O, t-shirt designs are by no means created by accident nor are they mere trendy, “pretty pictures”. Instead, these are borne out of well-thought, strategic processes and considerations. Through the years, we have had our fair share of t-shirt designs – done for different clients and purposes such as humanitarian projects, internal usage, campaigns, etc.

From Support Cast to Star

When W3-O designed the t-shirt for the Madhu Duniya event, a jamboree of forest honey harvester of Asia, the objective was to provide support to the event’s other collaterals. This wasn’t meant to be. The organisers loved the design so much because it clearly conveyed the event’s message, that they eventually chose it as the main logo. So when in most cases, the t-shirt design will follow the corporate/event logo, it became the other way around. Talk about the “tail wagging the dog”, so to speak. 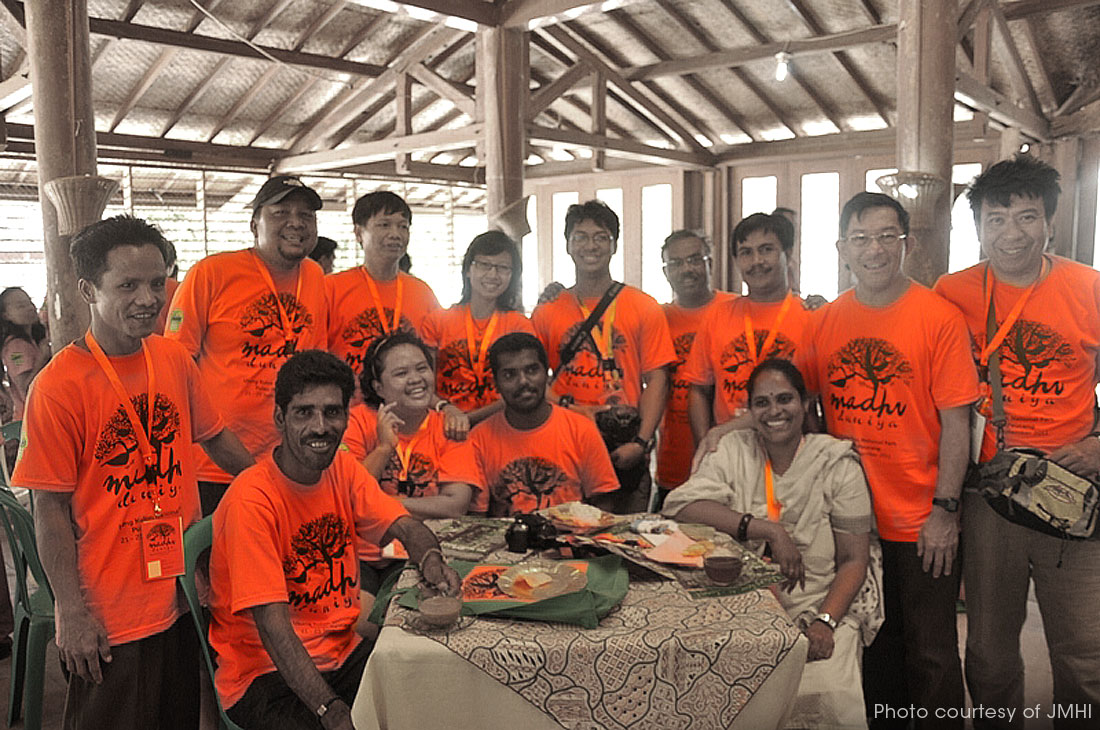 Simple can be Spectacular

More often than not, W3-O faces budgetary constraints especially when humanitarian clients are concerned. The THF volunteer t-shirt is a prime example. The brief was single-mindedly simple: it shouldn’t cost so much to print, thus, it’s a single colour print. We thought a single colour is not an excuse to look sub-standard. After all, THF also wanted to merchandise them so, it must really look like something that they could wear many times and be proud about it – pretty much like when you’re wearing a cool surfing t-shirt. This is what the red-hot shirt projected with its unique ball of rope mash-up with the THF logo to signify how all of us are connected and that we need help each other by reaching out, lending a “rope” to hold on. Simple, but intensely meaningful. 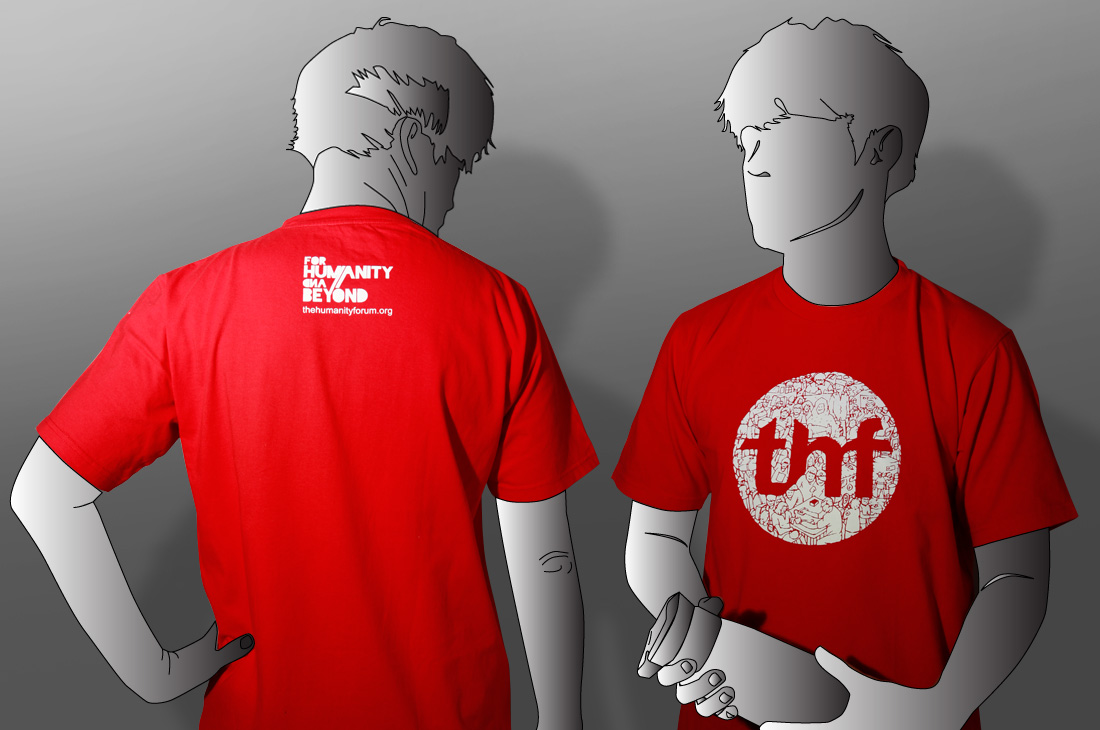 Once upon a time, we were challenged to design an internal t-shirt. Problem is we only need to print about 25 pieces. Usage would be fairly “rare”, maybe 2-3 times a year so while we were initially very sceptical about it, we decided to go for hot iron printing. The thing is, there are a lot of limitations with this method, so many cons. But one of the pros is that this method also allows us to have “unlimited colours” and high details. Our designer had to give his brain juice a little extra squeeze. And it paid off well. Three years later, the t-shirts still look awesome! 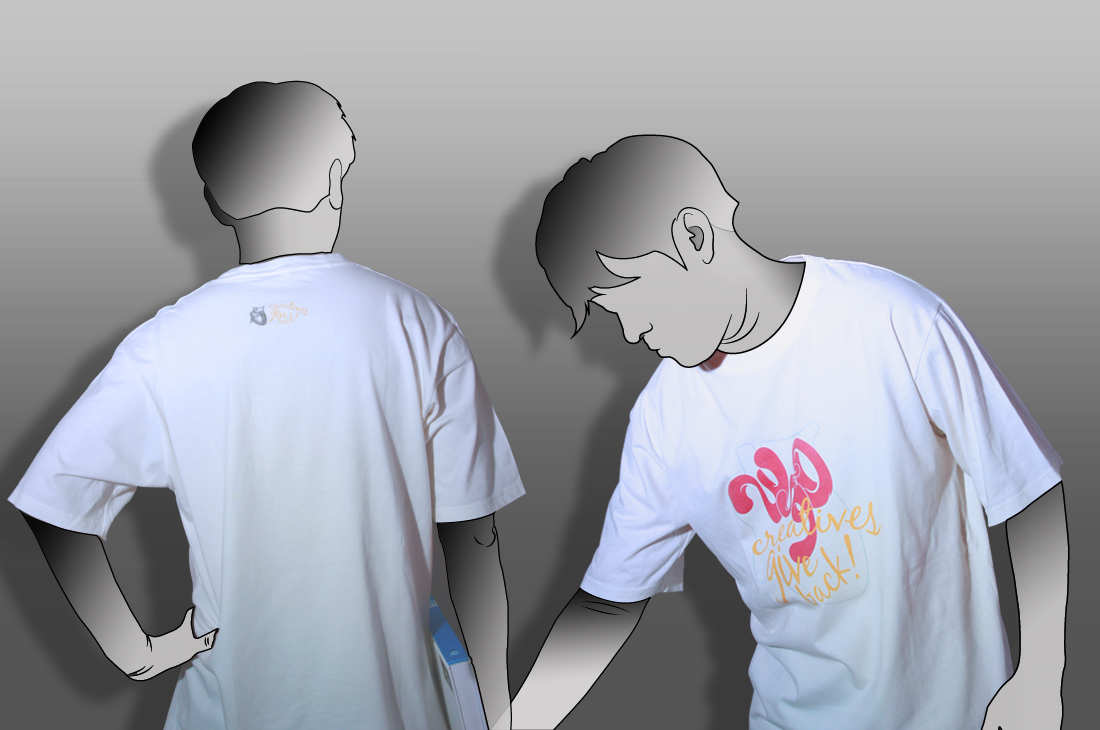 Heart of the Matter

For our humanitarian mission to Mantalongon, Cebu, The Philippines, we wanted a t-shirt design that encompassed the mission’s theme, “Let’s Colour Up Their Life”. The mission was in support of the educational needs of some 305 kids from the Living Gospel Community, mostly from poor families whose parents are fishermen, construction workers, labourers and carpenters. The result was this colourful, stylised heart design which is an apt symbol of hope that cheered up these kids who were otherwise living “black and white” lives. 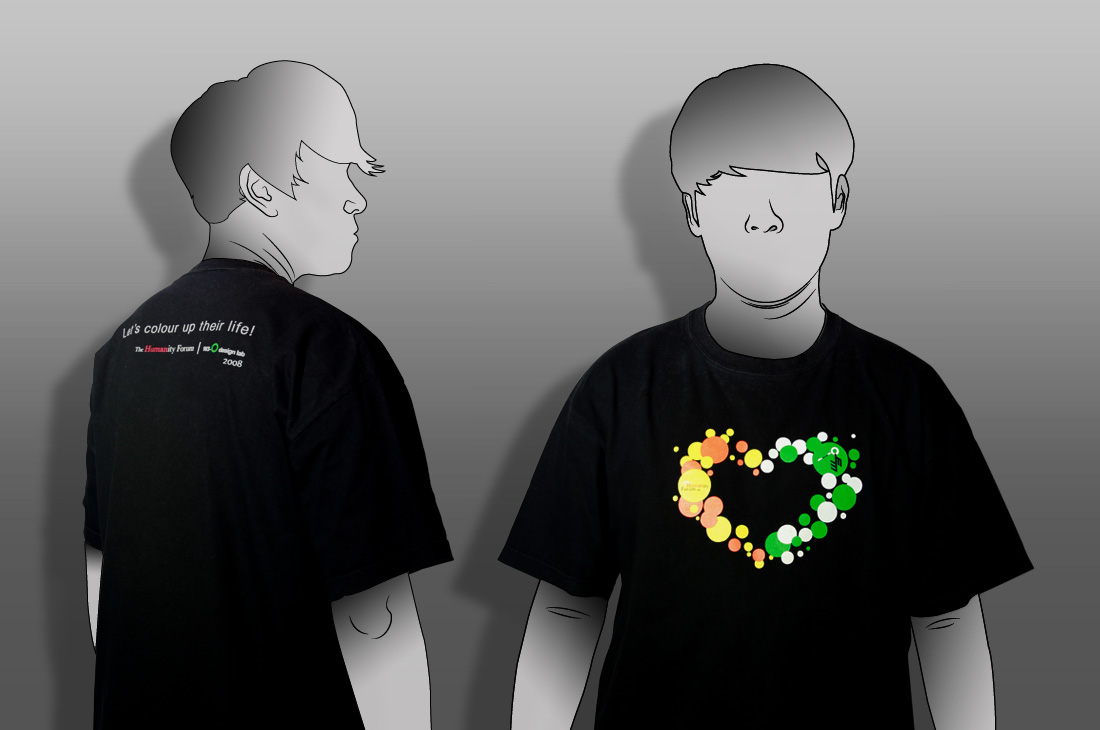 For the Media Development Authority of Singapore, media ratings may be a boring topic for a road show, with students to target at that. W3-O’s marching orders were to create a fun giveaway t-shirt as part of this national campaign, one that has to be very fun, particularly to the young folks that the government agency is targeting. The result is a chic yet edgy looking t-shirt design that just about anyone would love to wear – regardless of the media ratings that are literally printed on it to boot! 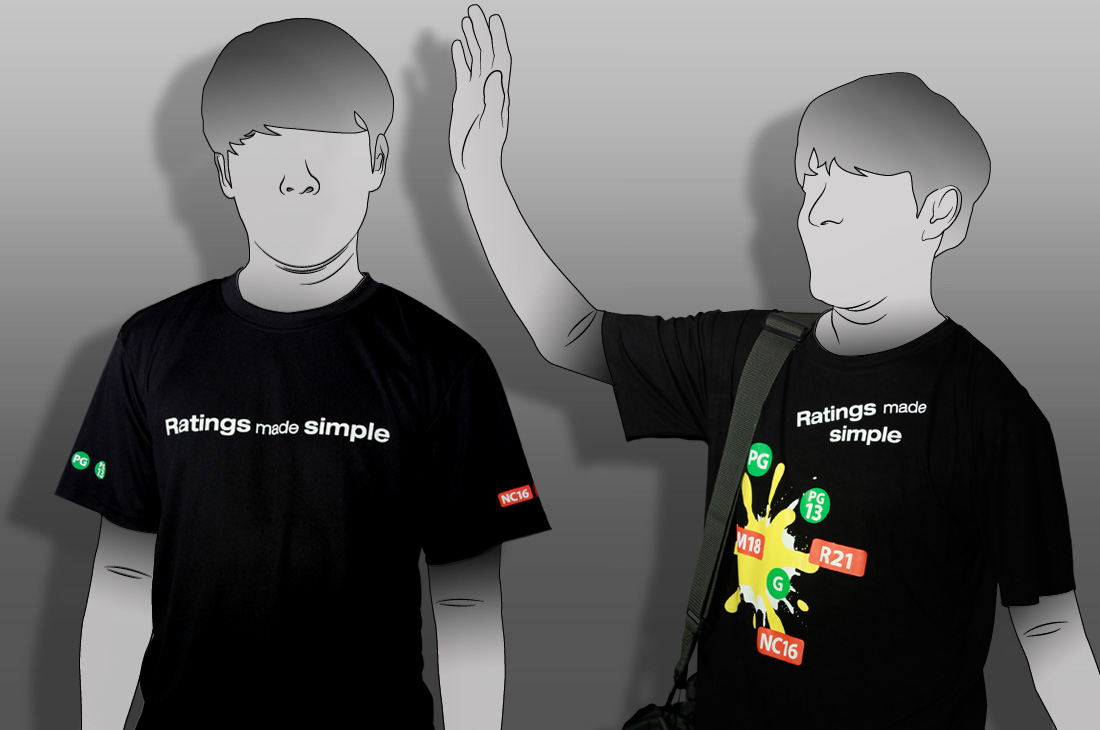 Take One for the Team

Again, for this project, W3-O had to “take one for the team”, as a manner of speaking. After all, budget is a major constraint. And the challenges are even more daunting. We needed to create a shirt where people could recognise Team9 members immediately in a disaster hit area. Of course, this is not our first time working with non-profit organisations, so when they mentioned about the budget, we thought, “brain-squeezing time” again.

To create this t-shirt design, we had to consider the situation where Team9ers will wear them. These places could be very messy and chaotic. While soldiers and police forces wear uniforms, Team9 volunteers could be mistaken as tourists, local workers or even some dodgy people who try to profit from disaster. The t-shirt is the first point of recognition for the team. Next, we need to “loudly” convey 2 things immediately: team name/logo and volunteer identity. It has to be loud since helpers could also easily be the victim in these situations. In case they get stranded or lost, people could spot them right away. Last but not least, as relief and “rebuilding” workers, we are supposed to bring hope to the disaster stricken area. So, we want Team9 to appear like the “hope” themselves. Hence, W3-O decided to avoid sombre colours and instead used the cheerful and bright red.

After it was tested on several humanitarian missions, Team9 appreciated our “hope and cheerful” concept as it really gave the vibe they wished to impart with the victims, particularly the IDPs (Internally Displaced People): A strong will to rebuild their lives with dignity. 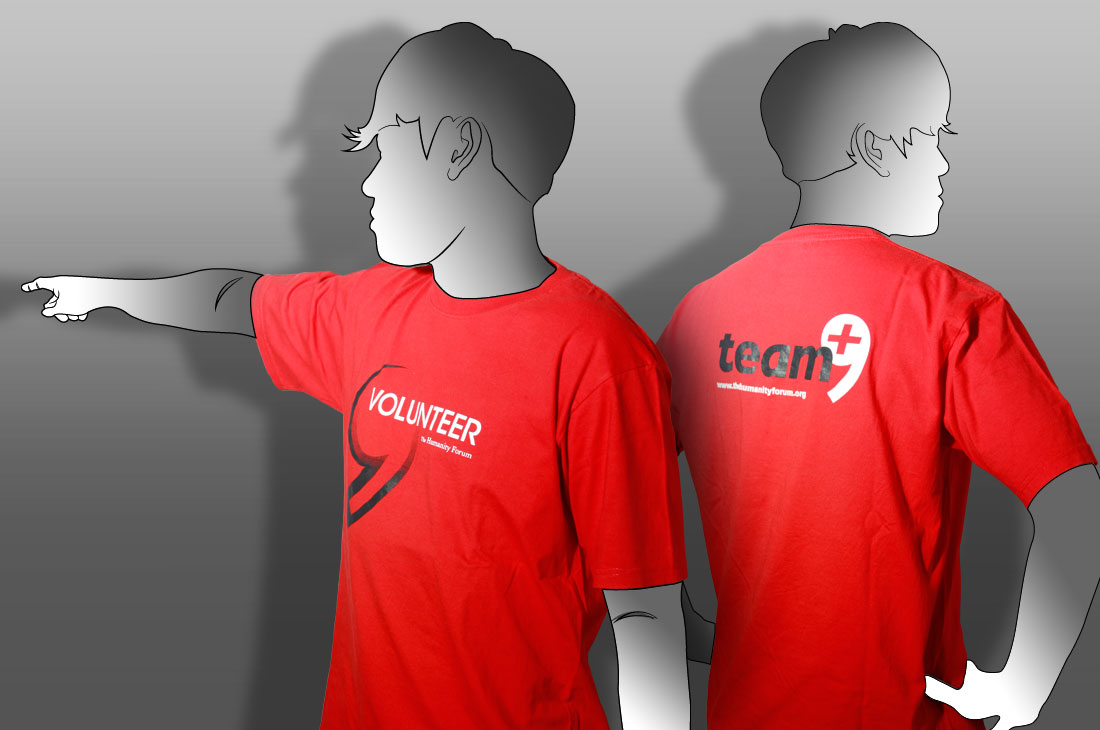 As all these projects show, each t-shirt design goes beyond the confines of artistic discipline but very much into factors such as branding, function, budget constraints, and technical considerations. In the end, each of them succeeds in telling a story, conveying a message, promoting an idea – or all of the above. Each has served a purpose like creating high visibility and impact, or provoked an emotion.

Perhaps in the long run, they too can become pop culture icons like “Smiley Face”, but more than that, we prefer they become symbols that touch hearts and improve humanity.